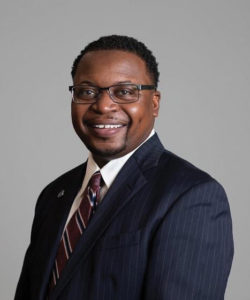 The Warner Pacific University (WPU) Board of Trustees announces the appointment of its eighth President, Dr. Brian L. Johnson, effective August 1, 2020. Dr. Johnson is currently vice president at Mercy College and campus administrator for its Manhattan Campus. He succeeds Dr. Andrea Cook, who has served as Warner Pacific’s president since 2008.

Dr. Johnson brings with him his background as a scholar of American literature and teaching and administrative appointments at a variety of institutions. Dr. Johnson officially takes his position on Aug. 1, 2020 and will be on campus full time beginning Sept. 01.

When describing what drew him to Warner Pacific, he says, “I want to be somewhere where I can bring to bear my faith commitments, my scholarly commitments, my ethnicity, and frankly, all the things that prepared me for this moment I see evidenced and embodied in Warner Pacific as a Christ-centered, urban, minority-serving and Hispanic-serving institution situated in a metropolitan environment. It fits everything I enjoy.”

Dr. Johnson replaces Dr. Andrea Cook, who served as WPU’s president for 12 years. Her presidency has been marked by transformations in outreach and inclusion, increasing the number of diverse students and earning WPU designation as a Hispanic-serving institution.

Dr. Cook notes that while she has been able to cause a lot of positive change at WPU, it is time for people like her to make space for others who do not look like her to continue the work of making higher education equitable. “People need WPU to flourish, … to prove it can be done.” Dr. Johnson will be the first African American to serve as WPU’s president and was a first-generation college student.

Dr. Johnson comes to WPU from a post as Vice President (Senior Campus Administrator) at Mercy College (Manhattan, NY), where he served from 2018 until now. Before that, he was President and CEO of the venerable Tuskegee University in Tuskegee, AL, from 2014-2017.  He also served as Interim Vice President for Strategic Planning and Institutional Effectiveness and Assistant Provost/Assistant Vice President for Academic Affairs at Austin Peay State University in Clarksville, TN.

Dr. Johnson is married to Shemeka Barnes Johnson, a Senior Vice President at Bank of America. The couple have two sons: Brian Asa (Asa), 16, and Nathan, 15.