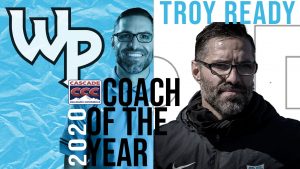 “No doubt it’s an honor to be recognized by the conference and by other coaches that I highly respect,” Ready humbly expressed. “We have slowly been making progress each season for the past three years but with this current team it does feel like there’s been a breakthrough,” he added.

The fate of Coach Ready’s 2020 squad now lies in the hands of the National Association of Intercollegiate Athletics (NAIA) Men’s Soccer Championships Selection Show, with hopes to receive an At-Large bid to the National Tournament for just the second time in 31 years.

A man who, when not on the pitch with the Knights, spends his time as a Chaplain for the Portland Timbers, Coach Ready focuses on growing his players into men of faith, integrity and character on and off the field. “When I first arrived at Warner Pacific, I remember meeting Troy and immediately being impressed by the vision he cast for his players and team to be one that would represent transformational faith in Jesus,” said Warner Pacific University Director of Athletics, Mike Wilson.

“I saw the character of Coach Ready and knew that his vision would come to fruition,” Wilson said. “With remarkable persistence and perseverance, Troy has shepherded this group of men into a team that exhibits integrity and a championship spirit on and off the pitch. The accolades that the Knights and Troy have received are well deserved and I know that this story is not finished,” he added with assurance.

A former collegiate star himself for the University of Washington Huskies, drafted in the first round by the Seattle Sounders before heading overseas, now makes his presence known in the community. In the truest Coach Ready form, the four-year head coach said he and his program “will celebrate the current success while at the same time knowing, ‘we have to be better’. Better in the classroom, better in our relationships, better in our character, and better on the field”.

Warner Pacific Men’s Soccer, a program nationally recognized for its success in the 80’s and 90’s, including a program best, Third Place at the 1985 NAIA Men’s Soccer National Championships, is once again making their name known at the national level with notable victories over top-ranked opponents. The Knights snapped an 850-day win streak, at the time the longest in the NAIA, with a 5-1 victory over the No. 15 Corban Warriors on March 28th, handing the Warriors their largest margin of defeat in two-and-a-half seasons.

The humble coach wasn’t shy to give credit to the supporting characters that made this honor possible; “it’s an honor to receive the award, but it truly must be known that it is only made possible through countless hours of sacrifice from our athletic trainers, the support of our administration, the incredible work of our assistant coaches, and ultimately the performances of our players,” Ready commented. “I’m celebrating with them in this acknowledgement,” he said.

Like every team in the nation, Warner Pacific was sidelined for months due to the Coronavirus pandemic, eventually pushing their season into the spring. With little practice and time together prior to the start of the season, Ready’s players showed determination and grit, “similar to all of the other teams, the players have had to navigate the season amidst the pandemic and have responded exceptionally well,” he said.

This year’s team finished the regular season scoring 2.86 goals per game while allowing just 1.14, they closed out their home season with a 5-0 stance and completed three come from behind wins. “I’m proud of this team for their grit on the defensive side of the ball and for the character they showed in several matches by coming from behind to win games,” said Ready. “We have always scored goals in this program, but the difference this year has been the collective resolve to defend and not concede ‘soft goals’,” he added.

Noting the importance of a healthy team culture in contributing to a program’s success, Ready is most “proud of the spirit of the team and the way the players love each other, support one another, and celebrate one another’s unique role within the team,” he said. “Every player on our roster, regardless of minutes played, has led to this year’s success,” he emphasized.

Letting the awe of the honor set in, Coach Ready couldn’t help but think of his dad, whom he credits for his drive towards character and excellence. Mr. Ready, who passed away five years ago, “ALWAYS went over and above to do the job the right way, love people the right way and was a tireless servant,” said his son. “Much of my desire to live in excellence was modeled after him,” Ready ended.

The 2020 Coach of the Year and his team will wait in anticipation to hear their name called on Monday, April 19th at 10am as they watch the NAIA Selection Show, hoping for a bid to the National Tournament.