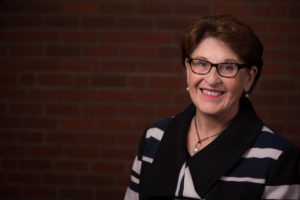 Andrea Cook, PhD, announced that she will step down as president in June 2020 at the conclusion of her 15th year at Warner Pacific University and 12th year as president. “I’m more passionate about our mission and vision today than ever,” Cook, the seventh president of the University stated. “I have deep conviction that Warner Pacific’s commitment to our communities is prophetic and we are incredibly positioned for the long run. It’s simply time for me to take a break after twelve years as president.”

“I am committed to radical excellence,” Cook remarked, “and I’ll continue to give everything I’ve got to ensure that 2019-20 will be marked as a year when Warner Pacific went through a healthy transition resulting in increased vibrancy for our mission and vision. WPU’s best days are ahead and I will be all in.”

The board will launch a search in November following the development of a Presidential Search Committee comprising representative University stakeholders with the intention of appointing a new president by April.

“Andrea Cook has been a remarkable president.” Greg Englund, a local attorney who serves as chair of the 23-member Warner Pacific Board of Trustees. “While she was under contract until June of 2021, she has determined that this is a good time to depart and she initiated early termination of her agreement. The Board has reluctantly honored her request and accepted her decision to leave earlier than planned. As a board, we continue to be fully supportive of Andrea and the work ahead this year. We appreciate that she has given us ample time to conduct an extensive and thorough search for her successor.”

In her 2009 inaugural address, Dr. Cook made a declaration that Warner Pacific’s urban identity would become its organizing principle. Believing that calling comes to and from a place, Dr. Cook courageously led the institution to explore how to best serve and be defined by the beauty of Portland’s historically marginalized communities. Since that time, Warner Pacific has grown to expand service beyond its Mt. Tabor campus to include regional centers for working adults and online classes offered in nearly 40 programs leading to a bachelor’s or master’s degree.

Today, racial and ethnic minority students represent more than 60% of the student body. Warner Pacific is the first and only Oregon four-year campus designated by the Department of Education as Hispanic-serving. More than59% are first-generation students. More than 57% qualify for Pell Grants. USNews ranks Warner Pacific University as a Best Value and current tuition rates make Warner Pacific the most affordable private four-year university in the Pacific Northwest. Projected undergraduate enrollment will exceed goals for fall 2019.

During Cook’s administration, WPU entered partnerships with a wide variety of community organizations to undergird increased opportunities for underserved students and their families. Likewise, WPU improved campus facilities including the addition of Egtvedt Hall in 2008 to include a new dining hall and the Tabor Grind Café during Cook’s tenure. In 2018, Cook led Warner Pacific College to University status; in the past two years, programs in criminal justice, medical laboratory science, sports and recreation management, sports medicine, nursing, finance and human resources have been added. Further, an MBA and a Master’s in Education were added to the graduate program offerings. In June of this year, SourceU, a joint effort with Epicodus and Warner Pacific University, launched in downtown Portland offering associate’s and bachelor’s degrees in cybersecurity, web and mobile development and digital product design to support the burgeoning software industry in Oregon.

Warner Pacific is a Christ-centered, urban, liberal arts university dedicated to providing students from diverse backgrounds an education that prepares them to engage actively in a constantly changing world.