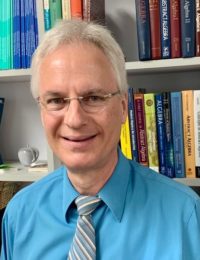 Since being a tutor and then teaching my first class as an undergraduate, I have known that I was created to be a mathematics teacher. While my research interests have been in linear algebra and matrix theory, I have been privileged in my career to teach virtually all undergraduate mathematics courses, including algebras of all kinds, calculus, statistics, logic, analysis, and history of mathematics. One of my greatest thrills as a teacher is watching students’ eyes light up when they see connections for the first time and experience some of the beauty of mathematics.

My other interests in life include music, reading, and cats (often all at the same time).