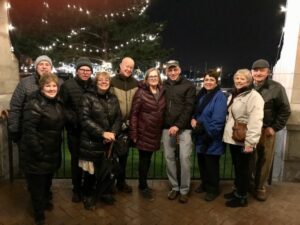 The Gang on NYE at Victoria

For over five decades, “The Gang” has been together, celebrating and enriching Warner Pacific University. During this time, they have also welcomed others into their group, with common interests and connections to Warner Pacific and to local churches. All of them are an important and cherished component of our rich history.

Ed and Deedee Bergler, currently reside in Happy Valley, Oregon. They have three children (one is a Warner Pacific alumnus), and nine grandchildren.

Deedee (Dunham) Bergler, from Portland, Oregon, is a teacher. She provides leadership in children’s ministries and women’s Bible studies; she also supports the church’s hospitality ministry.

Tom and Vicki Cochran, currently reside in Oregon City, Oregon. They have four children and 12 grandchildren.

Tom Cochran, from Edmonds, Washington, is a retired Portland Public School teacher. He taught art in the classroom, and building and construction in Vocational Education. He is also a home builder and remodeler, served on the church board and committee leadership during the remodeling of Woodstock Church of God and the construction of Mt. Scott Church of God. Tom has served as a church teacher for college and young marrieds; a leader for Youth Alpha and Bible Study Fellowship; and is a former Warner Pacific art instructor.

Vicki (Roller) Cochran, from Reno, Nevada, is a retired special education teacher with Oregon City Schools. She is was women’s fitness franchise owner; member of church council and missions boards; leader in women’s ministry and Bible Study Fellowship; a member of the church hospitality team; and volunteer at the Oregon City pregnancy center. Vicki was a member of the Warner Pacific Alumni Council and is a former Warner Pacific history instructor.

Doug and Susan Hamilton, currently reside in Vancouver, Washington. They have two children who are both Warner Pacific alumni, and two grandchildren.

Doug Hamilton, from Palmer Alaska, is a retired teacher and administrator for Evergreen Public Schools. He has provided communications and media production leadership for church advancement projects. He is also the former editor of the Warner Pacific alumni newsletter and former president of the Alumni Association. He has served as a language arts instructor and drama coach at Warner Pacific.

Susan (LaVelle) Hamilton, from Hanford, California, has been an elementary school teacher for 37 years. At church, she has taught classes for young married couples. A published author, she also served as a tutor for a women’s shelter; has taught parenting and marriage classes for Kaiser Permanente; and has served as a mentor for a teen mothers program.

Bill and Jean Pyne, currently reside in the Salmon Creek neighborhood of Vancouver, Washington. They have two children and five grandchildren.

Bill Pyne, from Hazelton, Idaho, is a retired high school teacher with Evergreen Public Schools. He was a media specialist and teacher at Oregon State School for the Deaf; served Portland Public Schools as a media specialist for the deaf program; and was a board member of Gospel Ministries for the Deaf for 35 years, 5 of those years as Director. He also has served on his church board. As a student, he was editor of the Warner World campus newspaper and he is a former member of the Warner Pacific Alumni Council.

Clem and Helen Ryan, currently reside in Damascus, Oregon. They have two children (one of whom is a Warner Pacific alumnus), and four grandchildren.

Clem Ryan, from George Town, Grand Cayman, is a retired field engineering manager with Bridgestone International Corporation. As a student, Clem managed the print shop on campus. He is involved with Lions International and has served on his church board and as a leader for annual community-based pageants.

Jack and Neva Nelson, are being recognized for this award posthumously. Prior to their passing, they resided in Gresham, Oregon. They are survived by two children and four grandchildren.

Jack Nelson, from Juneau, Alaska, served as a pastor, US Army chaplain, and hospice chaplain. He also worked on the Alaska oil pipeline construction and as a home remodeler.

Neva (Teague) Nelson, from Kennewick, Washington, was a pastor and hospice chaplain, and also worked as church office staff.