Jim and Terri met as elementary school students in Kennewick, Washington, where they both attended the same Church of God.  After graduating from high school, Terri spent a year in Brazil with Rotary International.  Jim attended Warner Pacific, where Terri rejoined him after her experience abroad.  While students at Warner Pacific, Jim and Terri were very 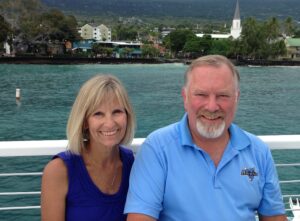 active in the college community, with Jim serving as the Freshman class President and student facilities director, playing in Duane Hamlin’s outstanding band, acting in theatrical presentations, and playing intramural sports.  Terri took as many class hours as possible while working off campus with Jim at UPS.

After attending Warner Pacific, Terri worked for Horizon Airlines and United Airlines.  When faced with the decision to work full time, or stay at home with her family, Terri made the decision to be at home on a full-time basis.  When asked about Terri as a wife and mother, their daughter quickly stated that Terri is a “prayer warrior.”  She is a humble servant, who is eager to host, and has a depth of kindness.

Upon Graduation in 1975, Jim began law school at Lewis and Clark College of Law, where he received his Juris Doctorate.  Jim was sworn into the Washington State Bar Association where he has remained a member for the last 40+ years.    Jim served in the insurance industry for 35 years, including 28 years with Standard Insurance Company in Portland where he held a number of positions including President of their retail broker dealer and Vice President of individual annuities. After officially retiring in 2013,,. Jim partnered with their son, James to start ProRisk Advisors, a general insurance and risk advisory company specializing in business and individual benefits and legacy planning.  While Jim prefers to spend his time on the golf course now, he has also written and published a children’s book and recently received his first patent.

Jim and Terri appreciate the commitment and sacrifices of the Warner Pacific faculty, staff, and administrators, in preparing them for a life of service.  At Warner, Jim received an undergraduate education that prepared him to succeed in law school and ultimately flourish in the competitive field of business.  Terri’s education prepared her for challenging work in the airline industry and gave her the ability to support her family with wisdom and grace, as well as volunteer her time and talents with organizations close to her heart.

Both Jim and Terri have continued to remain involved with WPU by serving on the Board of Trustees, the President’s Advisory Council, and chairing the selection team that chose Dr. Andrea Cook as Warner Pacific College’s seventh, and first female, president. They have a heart for Warner Pacific and their legacy to the college is shown through their faithful service, generosity, and prayer.   Jim and Terri raised two Warner Pacific University graduates, who also married WPU graduates.  Their son graduated from WPU’s sister college, Warner Southern in Florida.  Only time will tell if their grandchildren will someday be counted among the proud Warner Pacific student community.