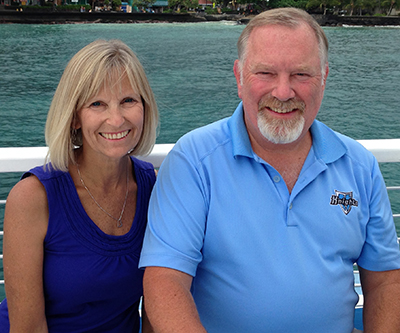 Jim and Terri met as children in Kennewick, Washington. After graduating from high school, Terri spent a year in Brazil with Rotary International. Jim attended Warner Pacific College, where Terri joined him after her experience abroad. While they were students at Warner Pacific, Jim and Terri were very active in the College community, with Jim serving as the Student Body President. Jim and Terri appreciate the commitment and sacrifices of the Warner Pacific faculty, staff, and administrators, in preparing them for a life of service. Jim received an education that prepared him to succeed in law school and ultimately flourish in the competitive field of law. Terri’s education prepared her to support her family with wisdom and grace, as well as volunteer her time and talents with organizations close to her heart.

After attending Warner Pacific College, Terri worked for Horizon and United Airlines. When the time came for their family to grow, Terri chose to set aside her professional career and support her family on a full time basis. When asked about Terri as a wife and mother, their daughter quickly stated that Terri is a “prayer warrior.” She is a humble servant, who is eager to host, and has a depth of kindness.

Upon graduation in 1975, Jim began law school at Lewis and Clark College of Law, where he received his Juris Doctorate. Jim later passed the Washington State Bar exam, and was sworn in as a member of the Washington State Bar Association. Jim received his Chartered Life Underwriter designation through The American College, while also obtaining his Licensed Securities Representative designation. After serving in the insurance industry for 32 years, Jim has partnered with their son to start ProRisk, a general insurance and risk advisory company specializing in business and individual benefit and legacy planning.

Jim and Terri Teague have partnered with Warner Pacific College to be an ongoing influence, ultimately advancing the call of Christ for future generations.