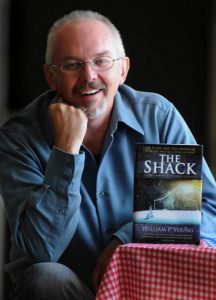 ’78 didn’t imagine a future as a New York Times best selling author when he put pen to paper and created an inspired Christmas gift for his six children. After sharing The Shack with friends and family, he heeded to their encouragement to have the novel published.

The struggling journey from tragedy to eternity resonated with readers. The Shack was on the New York Times Best Seller list for almost two years after gaining popularity in 2008 and becoming a USA Today best seller. Nine years later with over 22 million copies in print worldwide, The Shack was beautifully transformed for the big screen.

“I have never written a book with an agenda but rather climbed inside story to explore human questions; about faith, God, and what it means to be human beings in a broken world. Good creative work opens up more space than it uses,” explains Young. “It is my opinion that a good deal of modern creative work offered to the world by the faith community deteriorates into religious propaganda and loses its artistic beauty. We need to trust the Holy Spirit, not play the Holy Spirit.”

Born in Grande Prairie, Alberta, Canada, Young and his missionary parents lived in the highlands of Netherlands New Guinea (West Papua), among the Dani, a technologically stone age tribal people, until he was six years old. “My father then worked as a pastor for a number of small churches in Western Canada; by the time I graduated from high school, I had attended 13 different schools.” Through the twists and turns of life, Young completed his undergraduate degree in Religion and graduated summa cum laude from Warner Pacific in 1978 and in December 2010, the College honored him with an Honorary Doctorate of Laws. 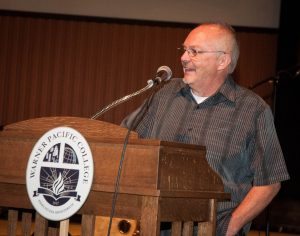 Young hopes that Warner Pacific students will not only enjoy the movie, that they will be encouraged in their faith. “The Shack, novel or movie, opens up space and I believe is highly respectful to the audience member. I think every person who sees the movie with have an encounter, depending on who they are and what they brought with them. It may be comfort, or affirmation, or confrontation. Personally, I think the movie is a fantastic adaptation of the book and anyone who loved the novel will not be disappointed by the film.”

In theaters now, The Shack takes us on a father’s transformative journey that will show him the ultimate truth about love, loss, and forgiveness.