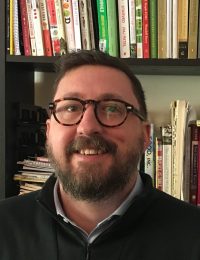 Professor Moyer is currently writing a book on the purposes, practices, and challenges of education in the United States. His research interests include philosophy of education, philosophy related to the environment, and ethics.

Since 2010, Prof. Moyer has been an adjunct professor at Warner Pacific University in both the traditional and adult degree programs, teaching courses in philosophy and the humanities. He has written and revised general studies curricula in the traditional and adult degree programs. He is the faculty director of a first-year learning community, entitled Food Carts, Farms, and Freddy’s: Thinking about Eating in Portland.

Prof. Moyer is a part-time member of the faculty at Chemeketa Community College in Salem, Oregon, where he has taught Introduction to Philosophy, Introduction to Ethics, and Philosophy of Religion, both on-ground and online.