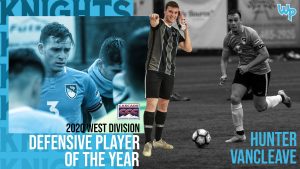 Recognized for his efforts directing the team from the back line forward, VanCleave and his defensive partners have held their opponents to 1.14 goals allowed and an 11-3 record, the best record in over a decade.

The award is voted by Men’s Soccer coaches across the Cascade Collegiate Conference. Expressing his pride in VanCleave for being honored for his integral role in the program’s history-setting success, Knights Head Coach Troy Ready is “thrilled that he was noticed for his significance to our team”.

VanCleave, a 6-foot defender out of Missioula, Montana, is in his second year on the squad. The senior came to Warner Pacific in 2019 after a successful career at Spokane Falls Community College where he was named the team’s Defensive MVP and a Northwest Athletic Conference All-Star.

The anchor on the backline for the Knights, VanCleave was named the CCC Defensive Player of the Week prior to his Player of the Year honor. Recognized for his efforts directing the team from the back line forward, VanCleave and his defensive partners have held their opponents to 1.14 goals allowed and an 11-3 record, the best record in over a decade.

The tight-knit Warner Pacific defensive line on and off the field, pulled off a historical win over No. 15 Corban Univeristy in a 5-1 victory. The Knights’ defense held the Warriors off the goal line en route to handing them their first loss in 850 days, snapping the NAIA’s longest active win streak.

In addition to his demanding presence on the back line and playing a total of 1,124 minutes, VanCleave tacked on one goal and three assists on the season.

“Capi” or “El Capitan”, as referred to by his teammates is “an honest player,” said his coach, Troy Ready. “He is always doing the right thing. Consistently taking in coaching points, modeling what it means to train properly, getting treatment after sessions, and encouraging teammates” Ready added.

Ready, who took home the Coach of the Year honor alongside his captain, is known among the Warner Pacific community for instituting integrity, character and responsibility into his players. Recognizing the redundancy of a coach holding players accountable, Ready appreciates Hunter’s leadership; “when you have players that reinforce the values and ethic of the team, then you have something special,” he expressed.

A vocal and humble leader on and off the pitch, Hunter has the “ability to demand the best out of others on a daily basis, in a way that his teammates respect,” commented his coach.

“Hunter is an ultimate joy to coach,” Ready concluded.

The senior captain intends to return to Warner Pacific for a final season of play in 2021 with hopes of continuing to build on the legacy being built with his guys by his side.

VanCleave and Knights’ post-season is up in the air and lies in the hands of the NAIA as the team waits in anticipation to hear their name called on Monday, April 19th at 10am as they watch the NAIA Selection Show, hoping for a bid to the National Tournament.